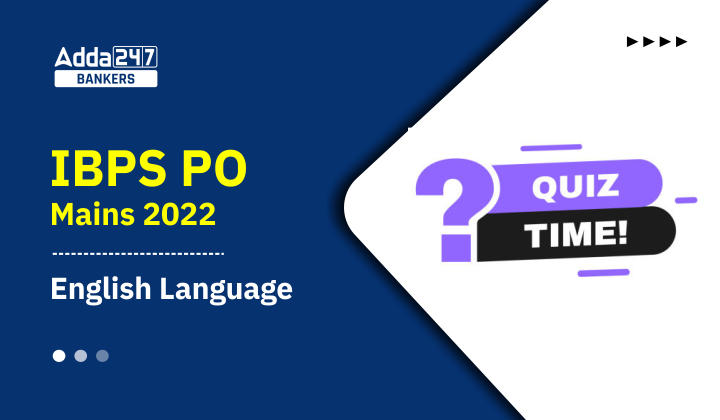 Directions (1-10): Rearrange the following five sentences (A), (B), (C), (D) and (E) in the proper sequence to form a meaningful paragraph and then answer the questions given below.

Q1. (A) A valid ‘Living Will’ facilitates passive euthanasia. A failure to legally recognize an advance medical directive inconveniences the “right to smoothen the dying process”, the court reasoned.
(B) It called passive euthanasia as a “mere acceleration of the inevitable conclusion.” Active euthanasia, the court concluded, is unlawful.
(C) In cases of terminally ill or permanently vegetative state patients, where there is no hope for revival, priority should be given to the Living Wills and the right of self-determination.
(D) Suicide involves “overt acts” which culminates in an unnatural death.
(E) The court distinguished passive euthanasia from suicide and active euthanasia.
(a) EBDCA
(b) EBDAC
(c) BEDCA
(d) BEDAC
(e) ECBDA

Q2. (A) They had no idea what an elephant was, and so they decided, “Even though we will not be able to see it, we can feel it. Let’s go.”
(B) “Oh, no! it is like the branch of a tree,” said the third man, touching the tusk of the elephant.
(C) One day the villagers were very excited, and when they asked what was happening they told them, “Hey, there is an elephant in the village today!”
(D) So, they all went to where the elephant was, and each of them touched it: “Hey, the elephant is a pillar,” said the first man, touching its leg.
(E) “Oh, no! it is like a rope,” said the second man, who was touching the tail.
(a) CDAEB
(b) CBADE
(c) CADBE
(d) EBDCA
(e) EDBAC

Q3. (A) The previous winter having been unusually severe, this spring feeling was like a form of intoxication in May, as if there were an overabundant supply of sap.

(B) Everybody I met seemed to be smiling; an air of happiness appeared to pervade everything in the warm light of returning spring.
(C) One might almost have said that a breeze of love was blowing through the city, and the sight of the young women whom I saw in the streets in their morning toilets, in the depths of whose eyes there lurked a hidden tenderness, and who walked with languid grace, filled my heart with agitation.
(D) One morning on waking I saw from my window the blue sky glowing in the sun above the neighbouring houses.
(E) The canaries hanging in the windows were singing loudly, and so were the servants on every floor; a cheerful noise rose up from the streets, and I went out, my spirits as bright as the day, to go—I did not exactly know where.
(a) ADEBC
(b) AEDBC
(c) AEDCB
(d) ADECB
(e) ABCED

Q4. (A) Sometimes he had flashbacks of sandstorms that used to whirl around the village, leaving behind a thick sandy layer all over the houses and even on his face.
(B) After settling down in the valley, he had adjusted to his new life by accepting the title of shepherd, something that he had never thought of doing before his forced immigration.
(C) Once the herd was settled, and busy grazing, he would sit down under his favourite tree and rest his head on the tree trunk and watch over the herd.
(D) It was his job to lead the herd to pasture and let them graze randomly on the lush green patches.
(E) He would often daydream of his beautiful village in Afghanistan: he missed the giant, dry mountains that stood erect like soldiers, as if they were guarding the village.
(a) BEDCA
(b) BDEAC
(c) BDCEA
(d) DBCEA
(e) CEBDA

Q5. (A) The tower is 324 metres (1,063 ft) tall, about the same height as an 81-storey building, and the tallest structure in Paris. Its base is square, measuring 125 metres on each side.
(B) Constructed from 1887–89 as the entrance to the 1889 World’s Fair, it was initially criticized by some of France’s leading artists and intellectuals for its design, but it has become a global cultural icon of France and one of the most recognizsable structures in the world.
(C) The Eiffel Tower is the most-visited paid monument in the world; 6.91 million people ascended it in 2015.
(D) The Eiffel Tower is a wrought iron lattice tower on the Champ de Mars in Paris, France.
(E) It is named after the engineer Gustave Eiffel, whose company designed and built the tower.
(a) ACDEB
(b) BCDEA
(c) CBEAD
(d) EABCD
(e) DEBCA

Q6.(A) Examples of projects requiring a preliminary site survey include urban construction, specialized construction (such as the location for a telescope) and wireless network design.
(B) The type of site survey and the best practices required depend on the nature of the project.
(C) It can determine a precise location, access, best orientation for the site and the location of obstacles.
(D) In hydrocarbon exploration, for example, site surveys are run over the proposed locations of offshore exploration or appraisal wells.
(E) Site surveys are inspections of an area where work is proposed, to gather information for a design or an estimate to complete the initial tasks required for an outdoor activity.
(a) ABCED
(b) ABCDE
(c) BCDEA
(d) ECBAD
(e) DABCE

Q7. (A) Along with Anil Kapoor and Urmila Matondkar, the actress played a greedy housewife going to extreme lengths for money.
(B) Talking about her swan song, critic Subhash K. Jha wrote that Sridevi “left us with the most stunning hurrah in Judaai.
(C) Sridevi acted in her comeback film in Malayalam in 1996 Bharatan’s Devaraagam, a love story in which she starred opposite Aravind Swamy.
(D) A terrible film that I’ve watched countless times to see her play the money-minded harridan who ‘sells’ her husband to Urmila Matondkar.
(E) The last major film Sridevi starred in before she took a break from the industry was Judaai, released in 1997.
(a) CEABD
(b) CBEAD
(c) ABCED
(d) DBAEC
(e) DECBA

Q8. (A) Appearing for the CBI, Additional Solicitor General Tushar Mehta had told the court that when asked for his phone password, Karti “virtually says go to hell”.
(B) The son of senior Congress leader and former union minister P Chidambaram also complained about the food he was being served in custody.
(C) The CBI had told the court earlier this week that Karti Chidambaram had flatly refused to share the password to his mobile phone.
(D) Karti Chidambaram, being investigated by the CBI for corruption, stressed today that he would not turn over his phone password to the CBI, speaking to NDTV as he waited for a court hearing.
(E) Karti was arrested on February 28 on charges that he had facilitated, for a bribe, investment approvals for the INX media group in 2007 and 2008 using the influence of his father, who was then Finance Minister.
(a) EACBD
(b) DEABC
(c) ABCDE
(d) EDCBA
(e) DBCAE

Q9. (A) The facility, which is a popular with tourists, also manufactures and sells tea.
(B) On Thursday night, it is believed that a fire spread from a section of the factory where green tea is processed.
(C) Fire-fighters rushed to the spot and fought the blaze for over two hours, before it was finally put out.
(D) Blustery winds near Doddabetta led to the fire quickly spreading, leading to more than 75 % of the factory being gutted, official from the Department of Fire and Rescue Services in Udhagamandalam said.
(E) Workers employed at the factory noticed the fire and informed the fire department a few minutes after the fire broke out.
(a) ABDCE
(b) ABDEC
(c) AECBD
(d) AECDB
(e) ADBEC

Q10. (A) But, it’s only human to not bother about the ‘what if’ moment that could otherwise leave one’s family in a state of financial crisis.
(B) You have recently started a family or are planning to get married.
(C) You become a responsible adult by the time you reach the age of 30.
(D) You are healthy, placed with a fantastic career. The pay is decent and financial stability is around the corner.
(E) You’ve bought a car or bike, perhaps you’ve invested in buying a house too. You’re travelling places.
(a) CEADB
(b) CBDEA
(c) CDBEA
(d) CEABD
(e) CDEAB

Directions (11-15): In each of the question given below a/an idiom/phrase is given in bold which is then followed by five options which then tries to decipher its meaning as used in the sentence. Choose the option which gives the meaning of the phrase most appropriately in context of the given sentence.

Q12. The little one spilled the beans about the surprise vacation we had planned.
(a) to hide a secret
(b) to reveal immediately what is meant to be revealed later
(c) to cancel a plan
(d) to keep any plan in abeyance
(e) to disclose a secret

Q13. I have decided that come hell or high water I will become an engineer.
(a) possible obstacles in your path (will not stop you)
(b) possible opportunities in your path
(c) possible links that makes you go higher
(d) possible delays in completing your task
(e) None of the above

Q14. She is always taunting others and hurting their sentiments. I just wish someone would give her a taste of her own medicine.
(a) when someone becomes sick and has to taste a medicine
(b) when someone suffers a bane
(c) When someone receives the same treatment, usually negative, that he/she gives to others
(d) when someone has to visit a doctor often
(e) when someone has to face the consequences of what he planned for others

Q15. When he was detected with diabetes, he quickly jumped on the bandwagon and joined the Zumba dance class.
(a) to quickly visit a doctor
(b) to immediately join a community
(c) to quickly start doing exercise
(d) to board a private vehicle and leave
(e) to join a popular activity or trend

S11. Ans.(b)
Sol. chip on his shoulder- when someone is upset about something that happened a while ago

S12. Ans.(e)
Sol. spilled the beans- to disclose a secret

S13. Ans.(a)
Sol. come hell or high water- possible obstacles in your path (will not stop you)

S14. Ans.(c)
Sol. taste of her own medicine- When someone receives the same treatment, usually negative, that he/she gives to others

S15. Ans.(e)
Sol. jumped on the bandwagon- to join a popular activity or trend